Alexandra and Roland met in high school 8 years ago at a play. They were there to write a report on it. It was a typically cold mid-winter Hobart evening. Roland lent Alexandra his gloves because she was freezing. His first thought of her was that she was tall and looked cold. Her first thought of him was that he was the same height and made a fairly decent wind shield. Definitely not a romance film. Roland kept the grand gestures of romance up his sleeve for when he proposed. 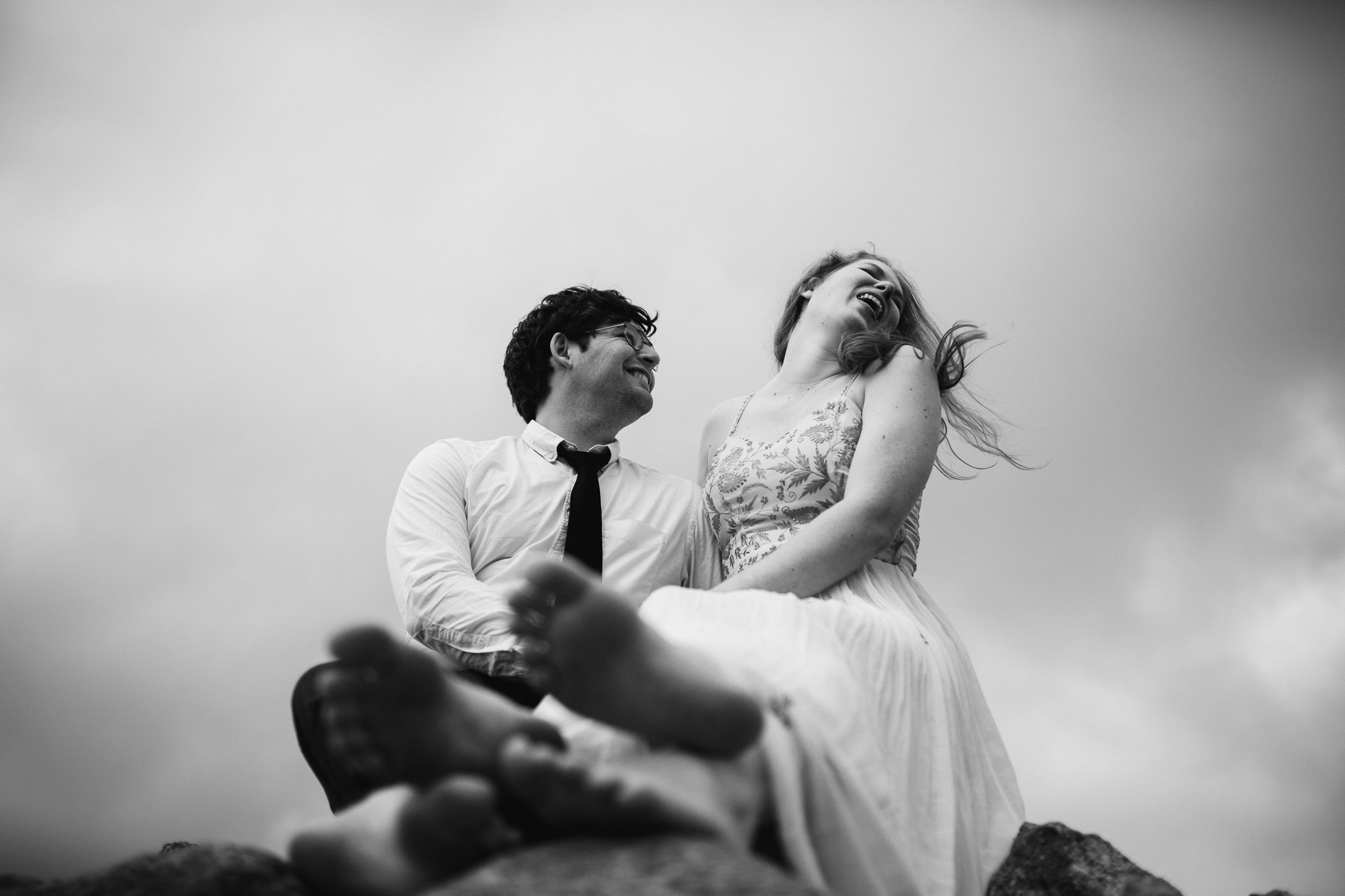 A couple of years before the engagement unfolded, Alexandra and Roland learned how to prospect. Roland-the-wind-shield came in handy during their adventures into Tasmania’s wild places. They spent a year travelling the state, honing their skills and looking for Tasmanian sapphires. During these adventures, the pair realised how well they worked together, filling in the skill gaps that the other lacked. Roland is excellent at navigation, while Alexandra possesses great bush skills. They also learned to accept making mistakes. They realised the strength of their personal connection and their connection to nature. This cemented the qualities they admire in each other – forgiveness and how they both feel that they have the freedom to make mistakes.

If you can admit that you will laugh about something someday, then you should just start laughing about it now.

Sapphires are found when the guide stone, spinel, is located. One is always with the other. On the day they finally found the perfect sapphire, Alexandra had made a wish upon a thistle down 20 minutes before they found their stone. She also furtively collected a piece of spinel for Roland’s ring at the same time, because she wanted their stones to be from the same pan and the same spot in the river. 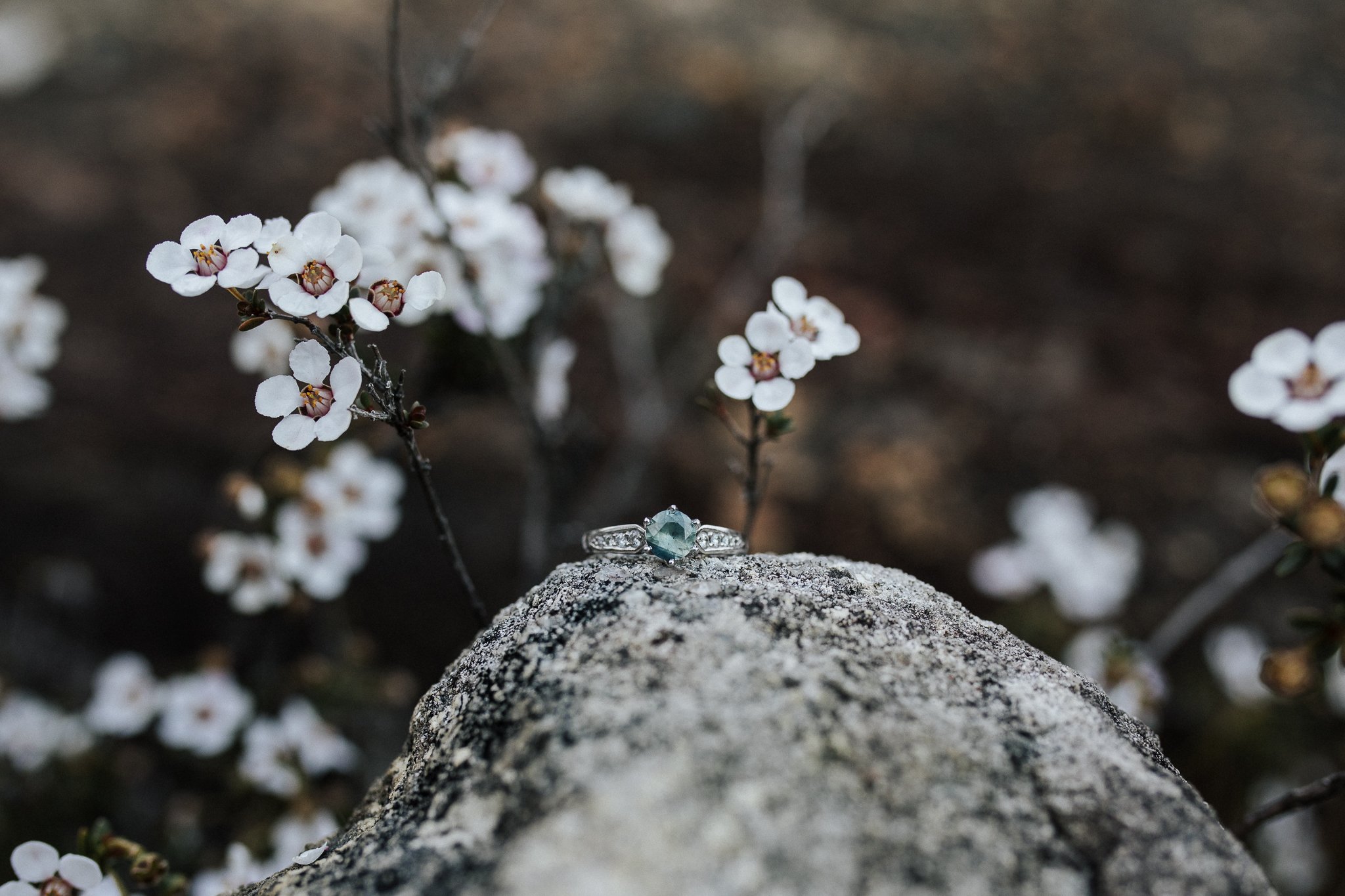 The couple worked closely with Chris Hood, gemmologist and head jewellery designer at Hobart-based Metal Urges Fine Jewellery, to design Alexandra’s ring. It turns out that the sapphire they found was quite exceptional – what started as 2.6 carat weighed in at 0.93 carat after it had been cut. The find stands as a testament to the couple’s perseverance and the way they find connection to each other in nature. There is a thistle down engraved on the inside of Alex’s ring as a reminder of the wish she made.

Planning a grand and romantic proposal can be fraught with unplanned hitches; and in the end things didn’t exactly go to plan for Roland. He booked the spa suite at Freycinet Lodge, with the intention of climbing the notoriously difficult Mt Amos with Alexandra and getting down on one knee. Mt Amos is one of the three granite mountains in the Freycinet NP, known as The Hazards. However, the first plan fell apart when a storm hit the state – the mountain is closed when it’s wet, as it’s too dangerous to climb. With the mountain closed, Roland thought he’d propose in the hotel room. That failed after the storm took the power out and closed roads, so the trip had to be cancelled. His third and final attempt was slightly more successful. He proposed in the bushland behind their house; except this time, the timer didn’t go off on the camera, so there were no photos.

Sensing Roland’s disappointment, Alexandra contacted me about her own grand plans – climbing Mt Amos together under the guise of an engagement shoot. But it was her turn to get down on one knee and give Roland the grand gesture he had had his heart set on. This required a lot of planning from Alexandra. First, she had to get a ring made for Roland. 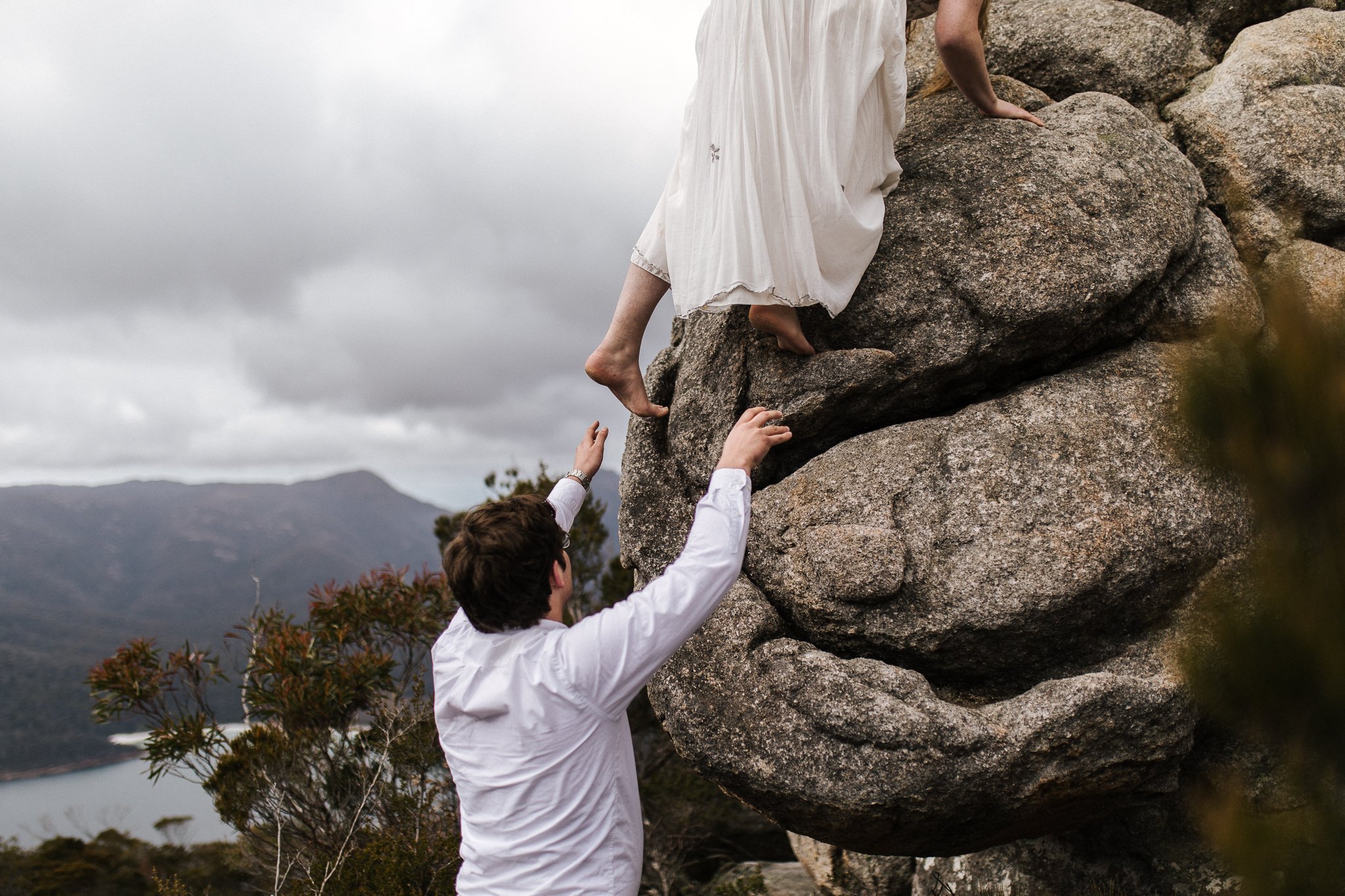 Alex secretly took the spinel to Chris to get the ring made. She had to make a lot of excuses for unexplained disappearing funds. A few white lies held him at bay. Next was planning the climb up Mt Amos. Both Roland and Alex are experienced hikers and knew they would be fine with the climb. But it wasn’t a matter of just setting off one morning. I had roped in my mate Ros – a Coles Bay local and photographer – to join us as and take behind the scenes photos. Ros also knew the mountain well. After a couple of date postponements due to weather, and with an EPERB in the backpack for an emergency, we finally set off at around 5:45am to scale tricky mountain before the heat of the day set in. At that time, there was just a little hint of the blue-grey light of dawn. It can get quite crowded at the summit, so we were incredibly fortunate that we had the mountain to ourselves for a couple of hours. Roland and Alexandra had formal wear in their bags, which they changed into once we reached the top. (Please don’t wear a suit or dress to climb Mt Amos.)

Five months after the original proposal, Alexandra’s counter-proposal was perfect, even if she had to hide the ring box in her cleavage. Finally, the sapphire and spinel were back together.

For Alexandra and Roland, being silly together at the edge of the world was a highlight of the proposal. The straps of Alex’s antique dress broke and Roland had to keep reminding her that her boobs were almost peeking out. They were in constant fits of giggles. From an outsider’s point of view, the most beautiful aspect of the session was the way the couple worked seamlessly together, and gently guided each other through climbing and jumping rocks at the summit. Roland acknowledges that he has become more self-aware and is able to forgive himself because of his relationship with Alexandra. He is extremely calm under pressure and has shown Alexandra new strategies for dealing with anxiety, especially in social situations. Their growth together could be seen on that mountain top.

While they are not legally married, they are overjoyed that they were able to express their love in a private commitment ceremony on a mountain they had dreamed of climbing since they first got together; with nature as their witness. They believe that a more formal ceremony would not have had the same meaning. They intend on having a very long engagement.

For now, they are happy to just keep growing and learning together; this means not being passive in their lives and living wholly in each moment:

“We recognise the things that we can’t change, but aren’t resigned to them. We are devoted to holding on to our memorable moments as we forge them. We want our lives to be all about the things we have helped each other to conquer, starting with a very steep mountain and a series of spectacularly unfortunate events.”