Connecting to country and community through your wedding; Lauren & Scott show us how.

Connecting to country and community through your wedding; Lauren & Scott show us how.

“The idea of sharing a meal, being loud and messy and intimate was important”. Lauren. 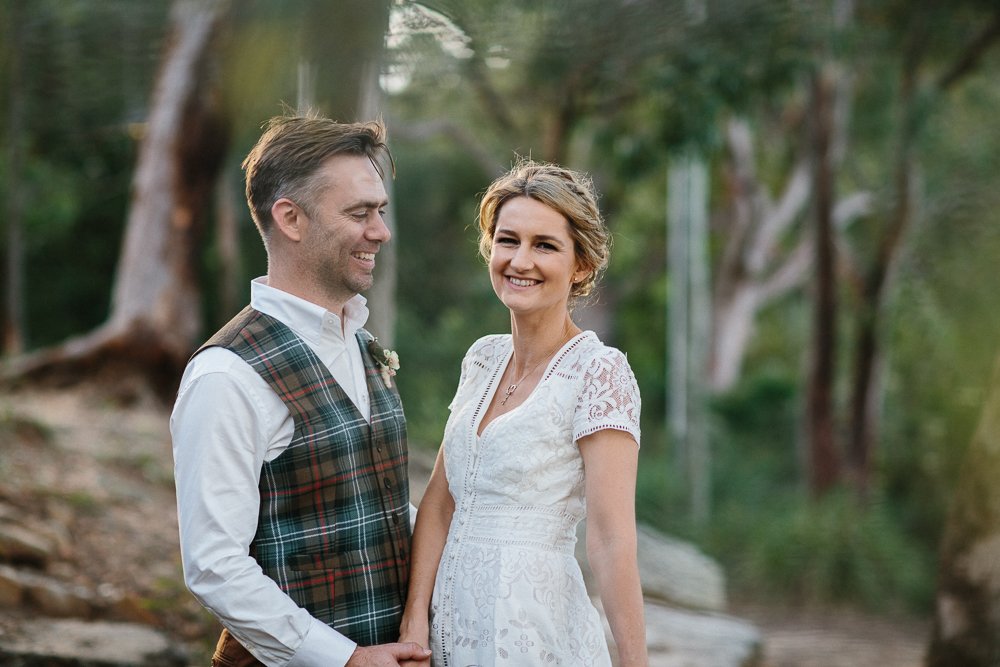 Here at Less Stuff, More Meaning we often say, all you need to get married is a Celebrant and two people in love. The rest is a bonus. Well Lauren and Scott chose a meaningful bush location, threw down a rug, hired some chairs and for dinner they had booked the nearby cafe. Voila!
“As a family we’ve been trying to be more careful about our impact on the environment and having a more eco friendly wedding felt congruent to this ethic. Whatever we could make, borrow or just leave out meant a bit less waste in the end”. 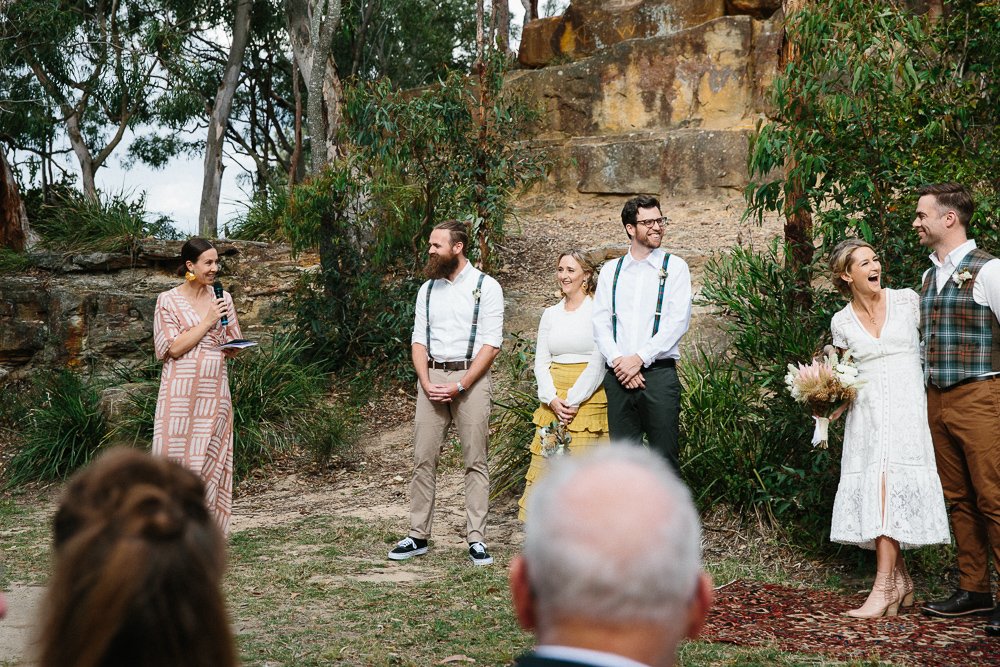 Together for 10 years, Lauren and Scott’s family already included two kids and one fur baby. They were doing things back-to-front, but never being one’s for tradition, this was totally fine by them. They were already fully committed to each other and hadn’t felt the need for a piece of paper to prove it. But over time, and as their relationship developed and deepened, their perspective began to change. They realised there was power in standing up in front of the people that meant the most to them and making a formal and public declaration.

“I went through a bit of a pre wedding ethical crisis. Because as we know marriage has not always been about love, fairness, family. For some it’s been about exclusion or servitude and in some places it still is. Luckily I was able to talk through all this with Scott as well as some dear friends.
I came to the realisation that ideas and rituals can be reclaimed and rewritten and for us marriage was about honouring our family and acknowledging our deep love and respect for each other. We were demonstrating through ritual a of exchange that we commit to each other and our family.
And maybe by naming and acknowledging these things we can help sustain a change to the way marriage is. About partnership, friendship, love and family”. 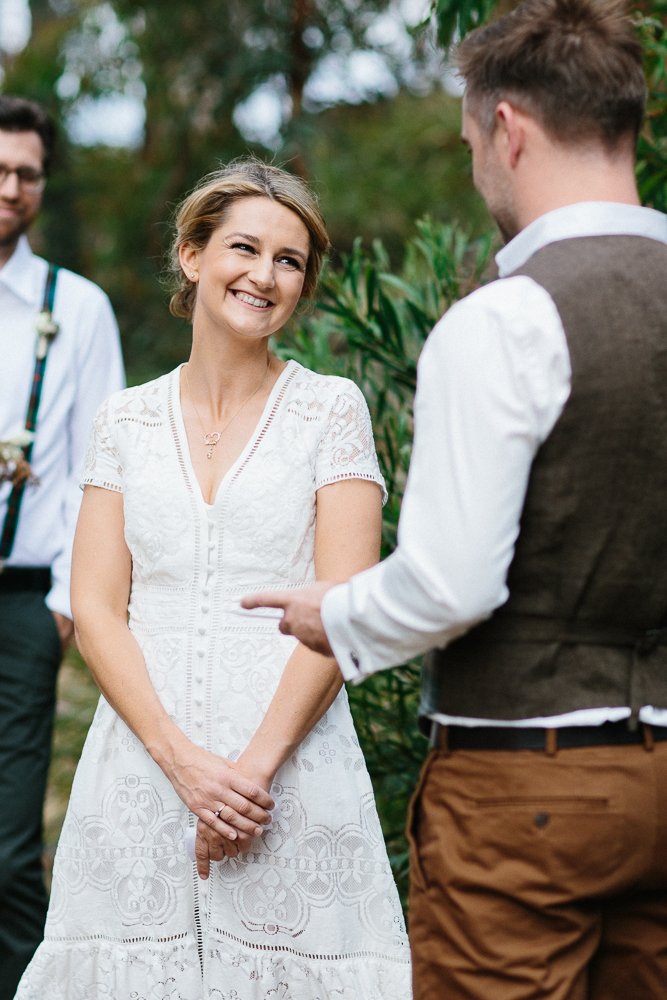 With full and busy lives, Lauren and Scott wanted their ceremony to be a low-key affair, but still incredibly meaningful. From a traditional smoking ceremony and Acknowledgement of Country led by Lauren’s friend Harry, a mixed wedding party of friends with no set sides and making an entrance together with their boys to telling their love story and writing heartfelt personal vows, every aspect of the ceremony was intentional and truly reflected them and their relationship. Even the location itself had special meaning. They wanted a natural setting and chose Como Pleasure Grounds as it was a special place they visited often as a family. 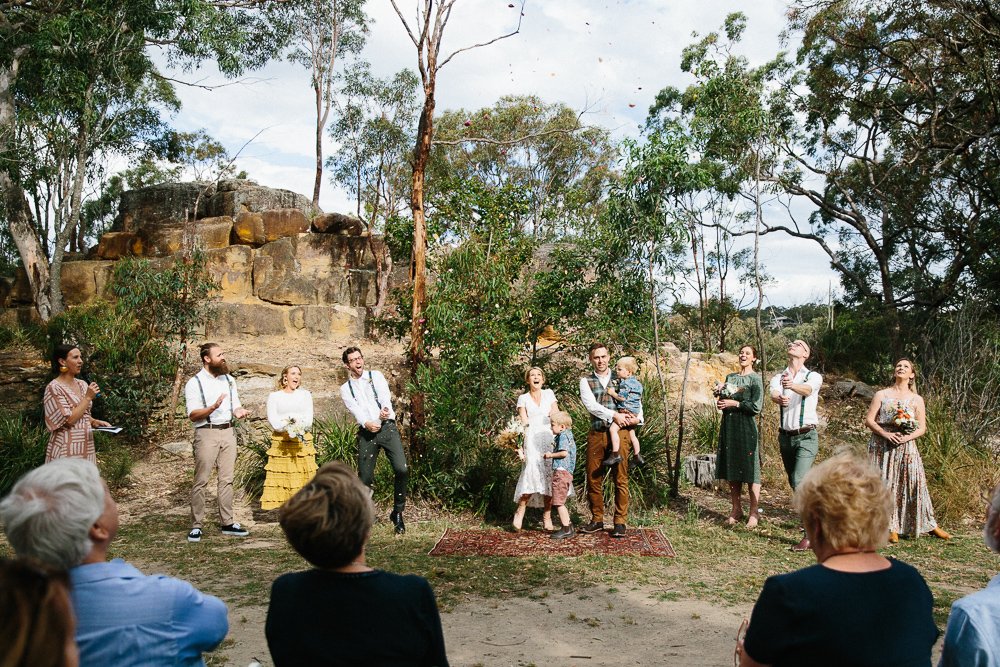 “There are so many special moments, but some include holding Scotts hand and looking out to this crowd of people with the most radiating and loving smiles shining at us. Harry conducting a smoking ceremony was incredibly special, giving us a meaningful way to acknowledge the traditional owners of the land and pay our respects. This cleansing ceremony grounded everything for us, and having it conducted by a friend made it all the more meaningful. Spending time hugging and speaking with everyone straight after the ceremony meant the world to us. Finally, we loved climbing up the rocks behind our ceremony while holding our little guys hands and making silly jokes to get them laughing”.

Their sons, being the most important people in their lives, were always going to feature in the day. Too young (and a little too shy) to speak, they helped with the rings and just generally added to the cuteness factor. At one point all the guests sighed a collective “awww” when their littlest guy declared “I love you mummy” mid-ceremony (followed shortly after by “lets go now”). A story that will be told over and over again for years to come. 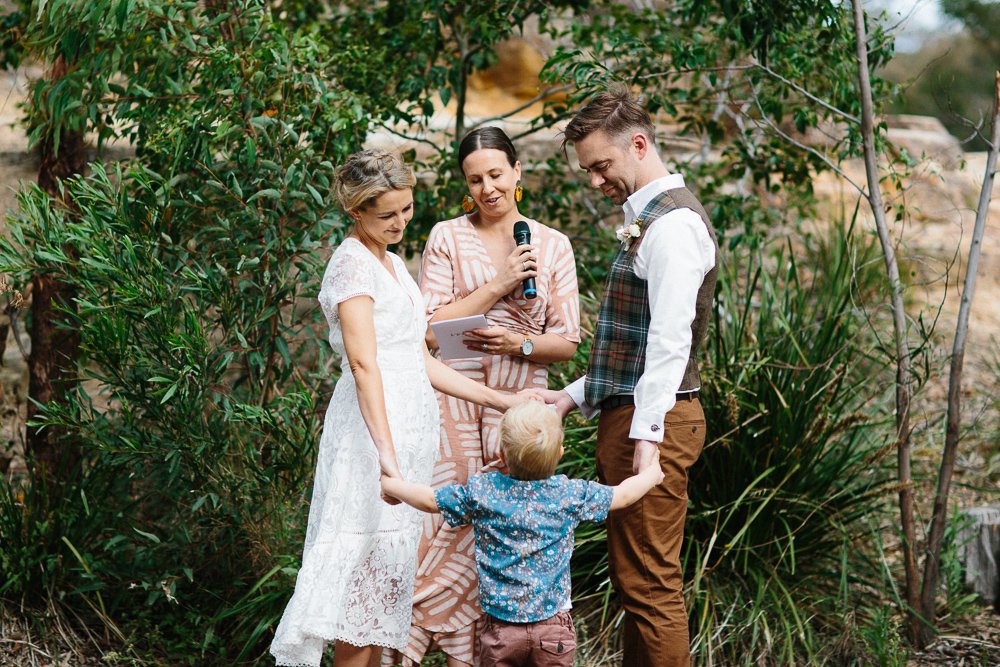 We asked Lauren and Scott, how was the Less Stuff, More Meaning of benefit to you?

“It was a wonderful find! I was able to see ideas of how we could make our wedding reflect our ideas, and not be pushed into so much of the marketing of the wedding industry that we just didn’t identify with. It also led us to Sandra who was the most incredible photographer and just understood from the moment we met her what it was we were after. The fact that she already knew Andrea our Celebrant, who I was also friends with, meant our little wedding team already felt really intimate and warm from the start”.

Thank-you so much Lauren and Scott, it was an absolute pleasure sharing your day with you.
Story told by Andrea Calodolce. Images by Sandra Henri Photography.
Enjoy their full gallery below;

Meet the experts - Tenille from Vegan Weddings and Events