Robert and Lindsey describe their wedding day as ‘humble and honest’. For them, this meant a small gathering, a modest budget and a village based approach with the aim to keep things simple and focussed on what matters most – their family and commitment.

As a sustainable flower grower and florist, and a wedding professional with insider industry knowledge, Lindsey also had a very clear idea of what she wanted, and also what she didn’t want.  With only ten weeks from ‘decision to day’, her insider knowledge and network of professional friends and connections helped them pull things off with relative ease.

Robert’s three young daughters, ‘the girls’ were also paramount in their minds.To keep them focussed and not agonising over decisions during the planning process, it always came back to three questions: “Is this what we want?”; “Is this worth getting stressed over?” and “What is best for the girls?”. 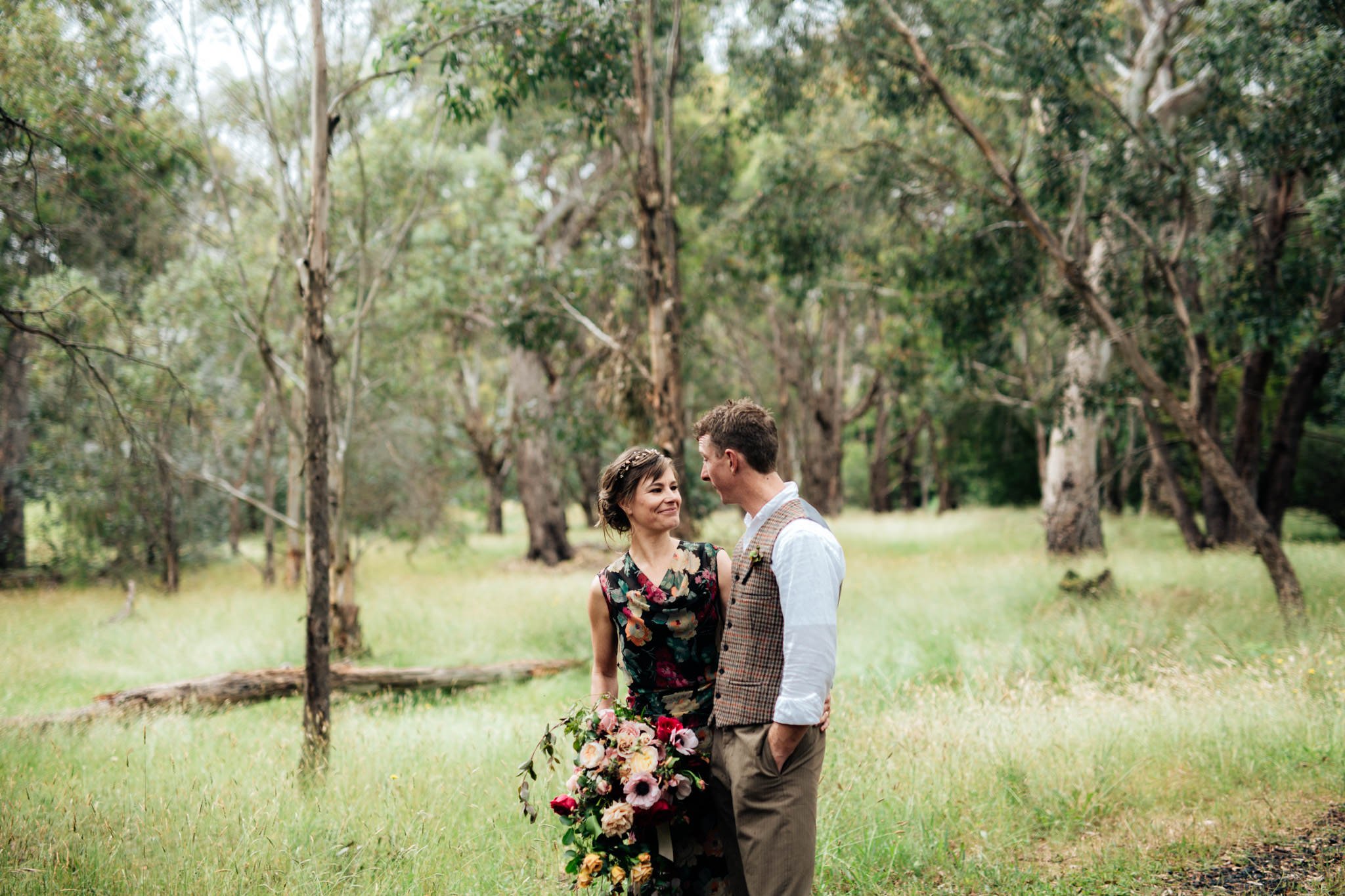 Additionally, Lindsey was also very aware of the potential for weddings to be wasteful and environmentally harmful, and with Robert’s natural affinity for the uncomplicated, they were united in their aversion to wastefulness, and so they set about very consciously to choose and prioritize according to their values.

They used local vendors, with family and friends also pitching in, and borrowed and re-used supplies to keep new purchases to a minimum, sourced items close to home, and if it wasn’t in the budget they made do, or made their own.

For example, after searching high and low for headpieces for herself and the girls, and the vintage antique ones were too expensive, but she couldn’t bring herself to buy the plastic cheap ones, Lindsey purchased wire, gemstones, beads and with the magic of golden and her craft box, set about making their own which proved to be a project of ‘absolute joy and something that felt much more authentic’.

This ‘can do’ community approach, combined with what they valued and what was “US”, allowed Lindsey and Robert to create something rich with colour and community, unpretentious and authentic; modest and delightfully individual.  What they created may have been modest and humble, but it was nothing short of magical and beautiful. 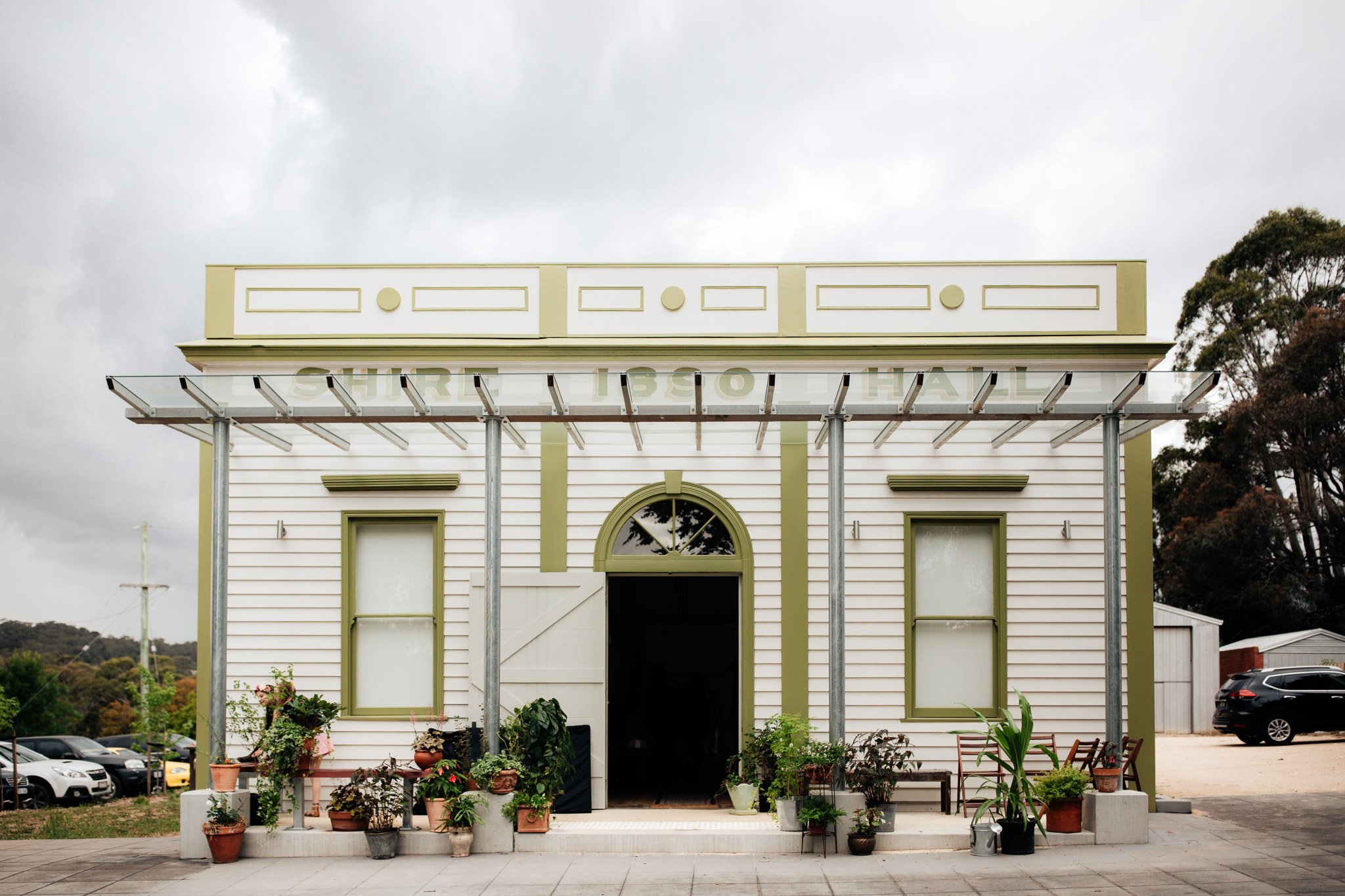 Their celebrations were located near their hometown regions of Macedon/Hepburn.  Actually, the local region is a key reason for their meet up story, brought together by the magic of Tinder, randomly thrown onto each other’s path by proximity alone.

Lindsey’s first thought about Robert when they met, was: “Hell, this guy has more energy, more enthusiasm and he talks more than me!”

Robert’s first thought was: “She looks like she is real. And she does stuff!”

As they got to know each other, the love grew big and love grew in the little and simple things. 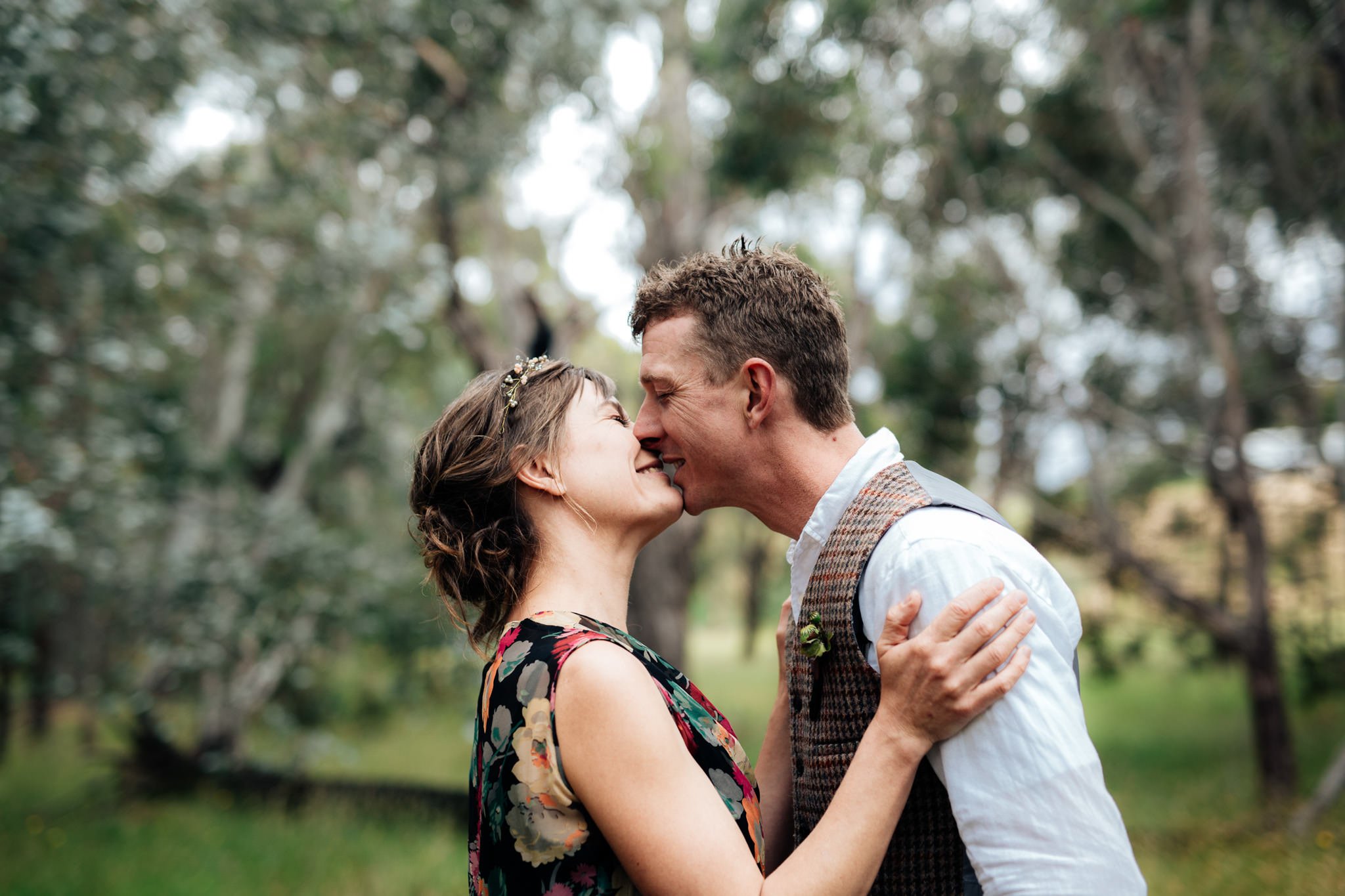 Lindsey on her love for Robert: “Thoughtful things? There are so many! But the one that gets me every time is  Robert heating up my mug for tea and refilling the tea leaf canister when it is low. He doesn’t even drink tea, but he knows it is vital to me.”

Robert on his love for Lindsey: “The moments I live for are just after I have warmed Lindsey’s tea cup or filled up the tea canister, or poured her an extra large whiskey. The joy in her reaction is what it’s all about.”

The ceremony was on a lovely little spot by the creek, adorned simply with urns of flowers and a mix and match of wooden chairs and benches.  Lindsey was so glad Robert held his nerve, holding off from Plan B and trusting the rain would abate for the service, which it did. In fact, for Lindsey it was special that it did rain on her wedding day. 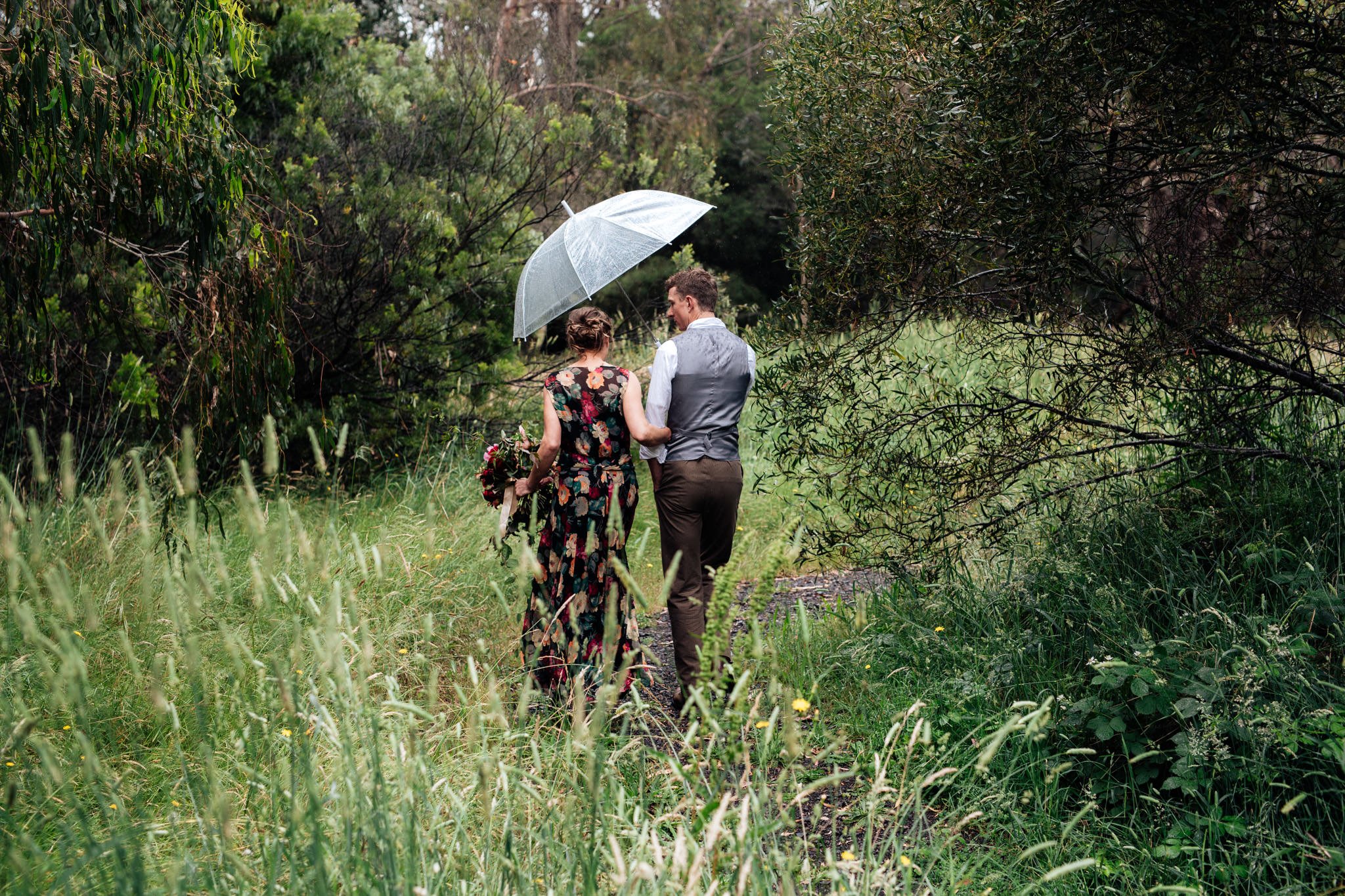 As a farmer herself and after suffering one of the driest of years on record, the rain, which turned into a deluge later, felt symbolic.  “It was relief. It was renewal. It was the start of new growth”. The kids all kicked off their shoes, stripped off their ‘smart’ clothes and hard mud fights and twirled in the rain blowing bubbles into the storm.  “I will remember that forever,” said Lindsey.

Other happy and special memories include the joyful music of the Ciderhouse Band, who were Roberts’ friends, a local old-timely band with a guitar, fiddle and double bass. They reflected the character and style of the day which which was akin to a 1900’s country village shindig.

Lindsey’s maternal grandmother made the trip from New Zealand for the special event.

“It was the main reason for the timing of the event. Being 86yrs old, she kept threatening that she wouldn’t make it out to Australia again….bet you she does”.

Also coming all the way from New Zealand, was her good flower friend, contributing her skill to work with Lindsey’s sustainably grown flower crop, to design a colourful and eclectic arrangement – a joint effort of flower artisan friends and supplemented with a local supply of garden roses too.

The sweet little Glenlyon Town Hall was remarkably well stocked with all sorts of essentials to throw a party.  For decorations Lindsey simply sourced and supplied her own elements such as hand dyed linen draping fabric, vintage table cloths and her collection of vases for those amazing florals.

For Robert and Lindsey, on some level, it was good to remember that the day was just a day. Only 24 hours. At the setting of the sun, it would be just one day among thousands of others. Yes, it was a significant day. It was their wedding day. And so another question that guided them was, “What is it that you will take away?” 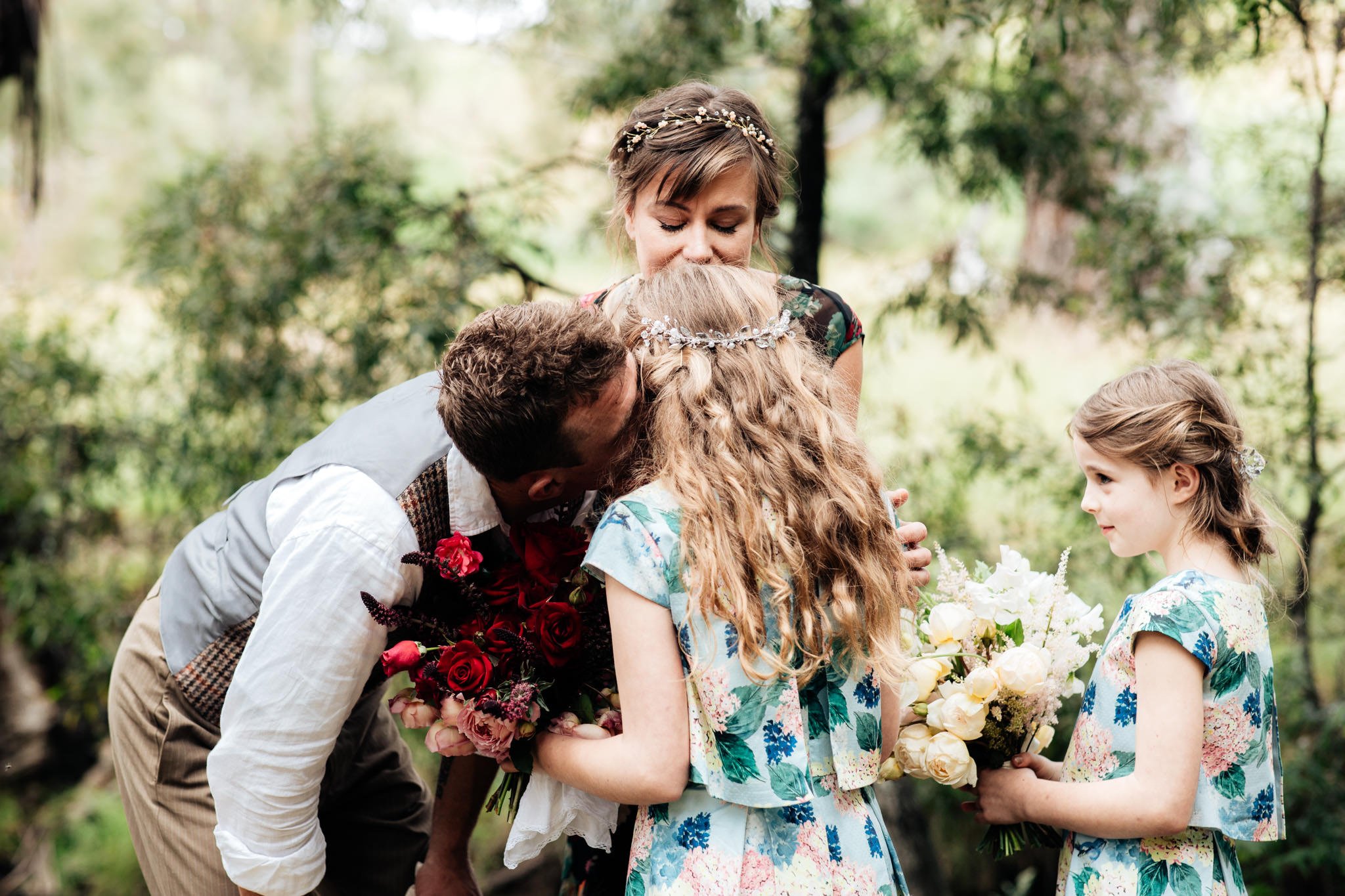 The answer to that comes from what marriage means to them.

“It is the commitment to keep working, to keep growing and to do it together,” says Lindsey.

Lindsey and Robert are still in the early phase of their love, meeting only 2 years and 2 months before they were married, but it meant they sorted a lot of things out fast, particularly with the responsibility of children too, and from the get go it was all about honesty.

And this honesty comes through in their life and love.

“To us, living purposefully means living honestly. Seek out truth and integrity, in your actions and words, in those you keep around you, and in the choices you make on a daily basis,” said Lindsey. 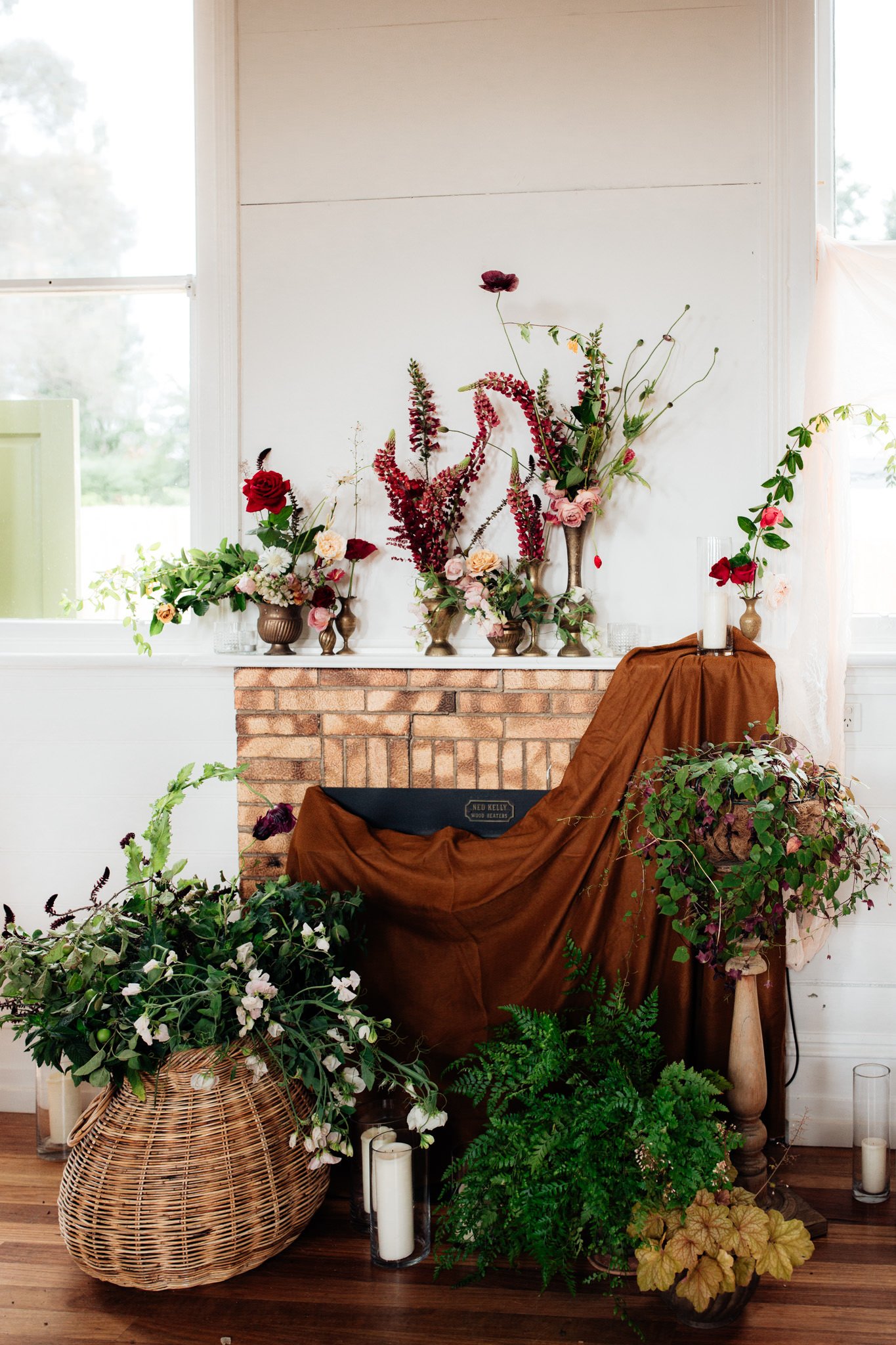 And this honesty came through in their wedding and approach to marriage too. An excerpt from Lindsey’s vows probably says it best:

“Unconditional love is both the hardest and the easiest thing in the world to work for.

It can be chosen in the blink of an eye. The concept is so very simple, and yet it requires brutal self honesty. It demands a never ending pursuit of self-awareness and self-betterment.

Images thanks to Ali Bant of Smith & Archer.

How to create a zero-waste wedding

How would a wedding photographer choose to get married? With Jon Harris, South Coast photographer