At the top of a peak on Djab Wurrung and Jardwadjali land on the morning of the 6th of December 2020, 6 hikers stood in the morning glow of the misted sun.  A place unknown to 4, a first time visit upon the request of the remaining 2 – Zoe and Eugineo.  Precisely 3 years earlier the couple had conquered the mountain alongside their fears through resilience and togetherness.  After a gruelling rock climb, one which took hours longer than expected, they hunted for the tourist track back down to the car park to no avail.  With heavy climbing gear and limited water the landscape of the Grampians effortlessly curved around them causing confusion and uncovering the stark reality of the harsh Australia Bush. Thankfully as the sun descended, so too did the couple, exhausted, relieved and grateful.  And so a legendary story was born… 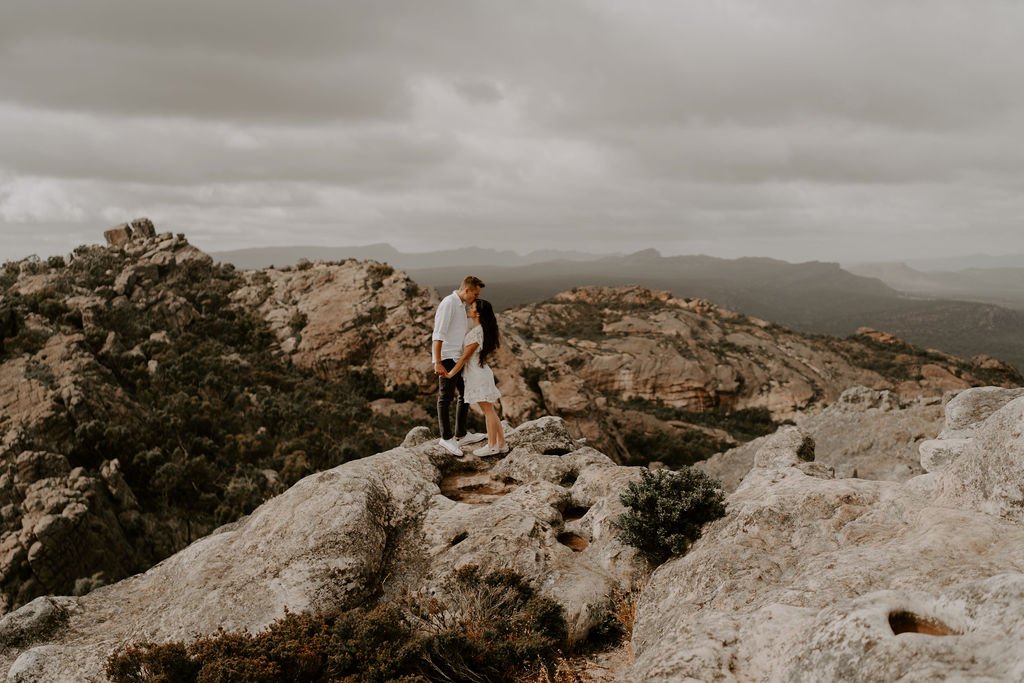 When the call was put out for a Celebrant who would be willing to haul themselves up this very peak to marry this couple… well, it kinda made sense that I put my hand up!  Mt. Stapylton was not a peak I had on my horizon per-say, however always up for a challenge and not remembering my one and only visit to the Grampians as a small child – I leapt at the opportunity (booking myself, my family AND my Aunt and Uncle in for the ride!)

And so it was that I found myself at the top of this peak with this couple, Photographer Mel Badsey and our two hiking buddies Rob and Alicia.  Even just a sneak peak of the tip of the top we were aiming for hiding in the dawning light showcased the extreme beauty of the location and sacredness of the land. 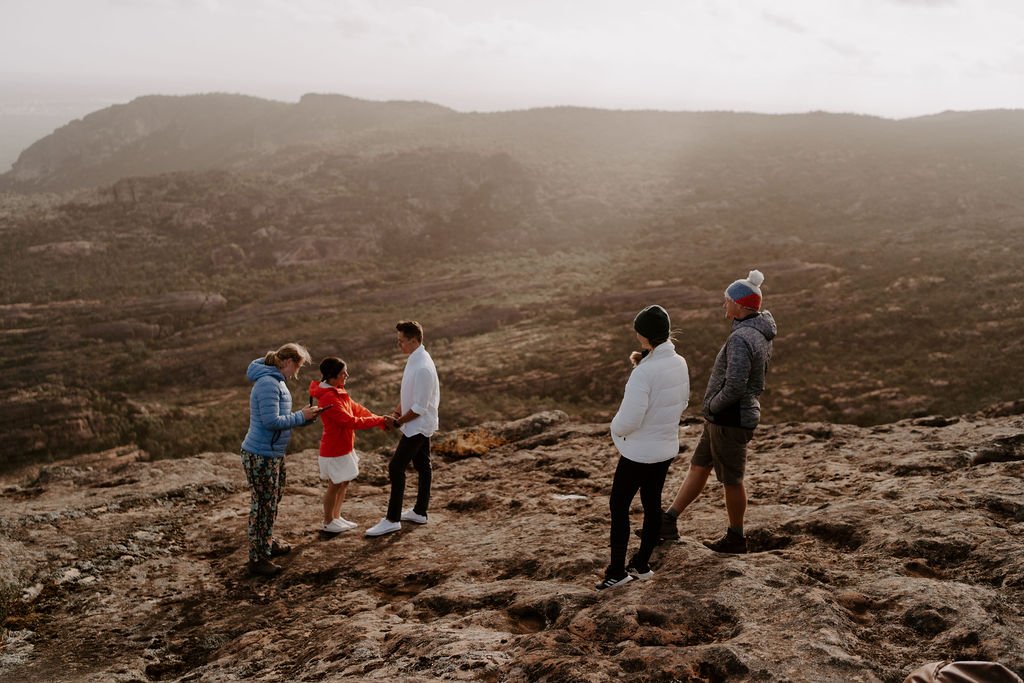 And whether or not it was a conscious routine or an unconscious necessity, Zoe and Eugineo bought new meaning to the very basis of ritual in this, their own rite of passage into married life.  You see as many of us rebel against the idea of  tradition, we often miss the ritual within.  One that it is essential to human life and unavoidable, even if we try to disregard it with all our might. Tradition is built from ritual and tradition changes just as quickly as ritual.  And so what started out as one thing, will have been swept along with time to mean something completely different – to both modern society and, of course, each individual and couple.

This couple place their moment of ‘knowing’ that their love was enduring to their first rock climb up Mt. Stapylton.  They were engaged on the dizzy heights of the top of the Italian Alps after 9 days of hiking.  Leading up to the wedding, they traveled the roads to the base of the Grampians 3 days in a row, counting kangaroos, observing the twists of the land and identifying pitfalls to share with their fellow travellers on ‘the day’. They hiked the trail 3 times, over 3 days and got married on the 3rd day after the 3rd hike.  They walked in together, down an extended isle, they shared their love via words written and memorised. They changed into white and photographed the moment while sweeping winds tangled their hair and the sun protruded from within the clouds. 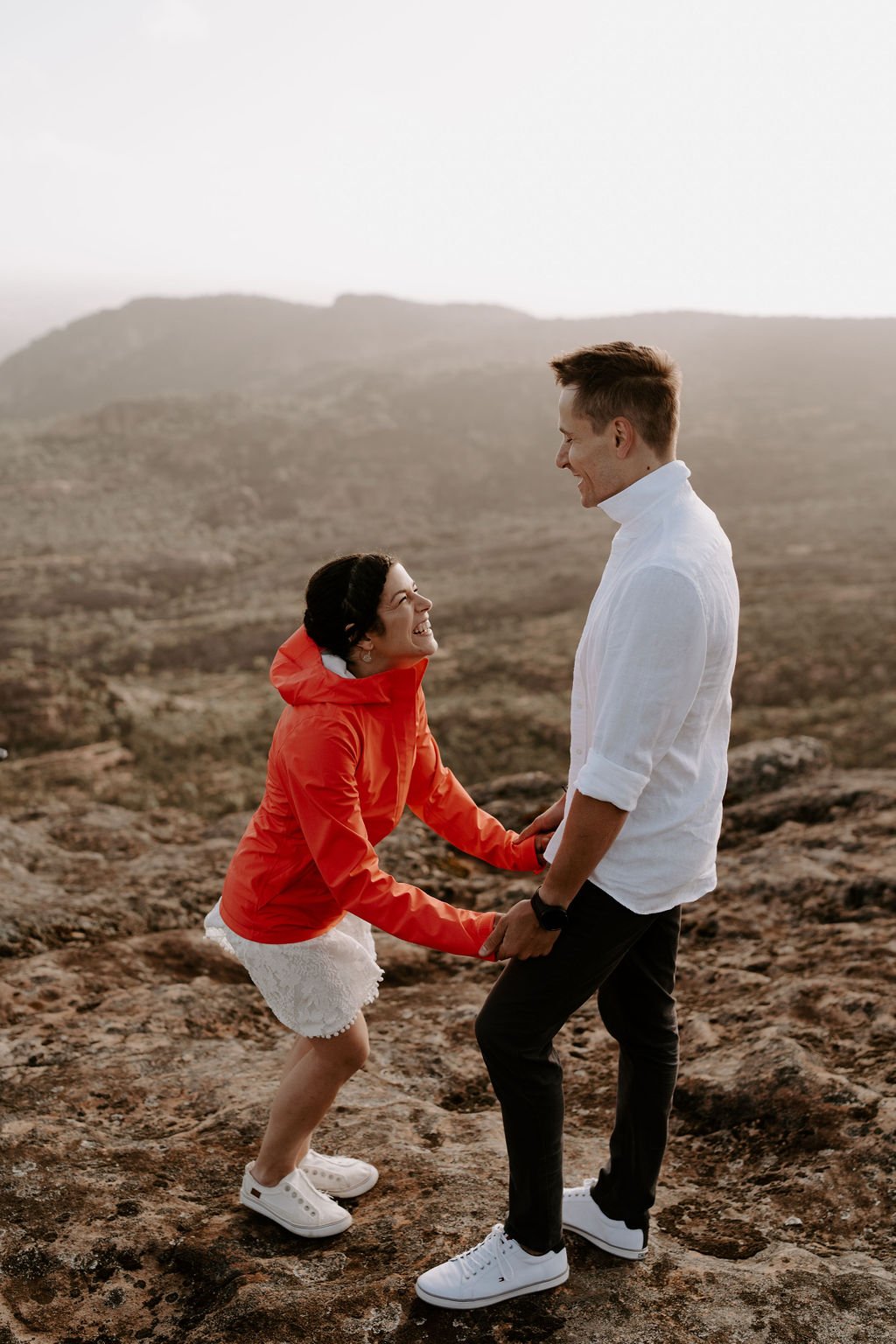 On paper it looks as if they rebelled against the norm and set up a new set of traditions.  And perhaps they did, to an extend. But in reality they stood alongside the traditions of old and called upon their own rituals within.  They shifted what was needed to share their souls with each other in a way that reflected their own idea of ceremony.  Above all they understood that with Ceremony comes ritual and one cannot exist without the other.  Tradition is born from both and together they walked down the mountain a married couple onto the next chapter of their adventures together, that being (with luck) the rite of passage into parenthood. 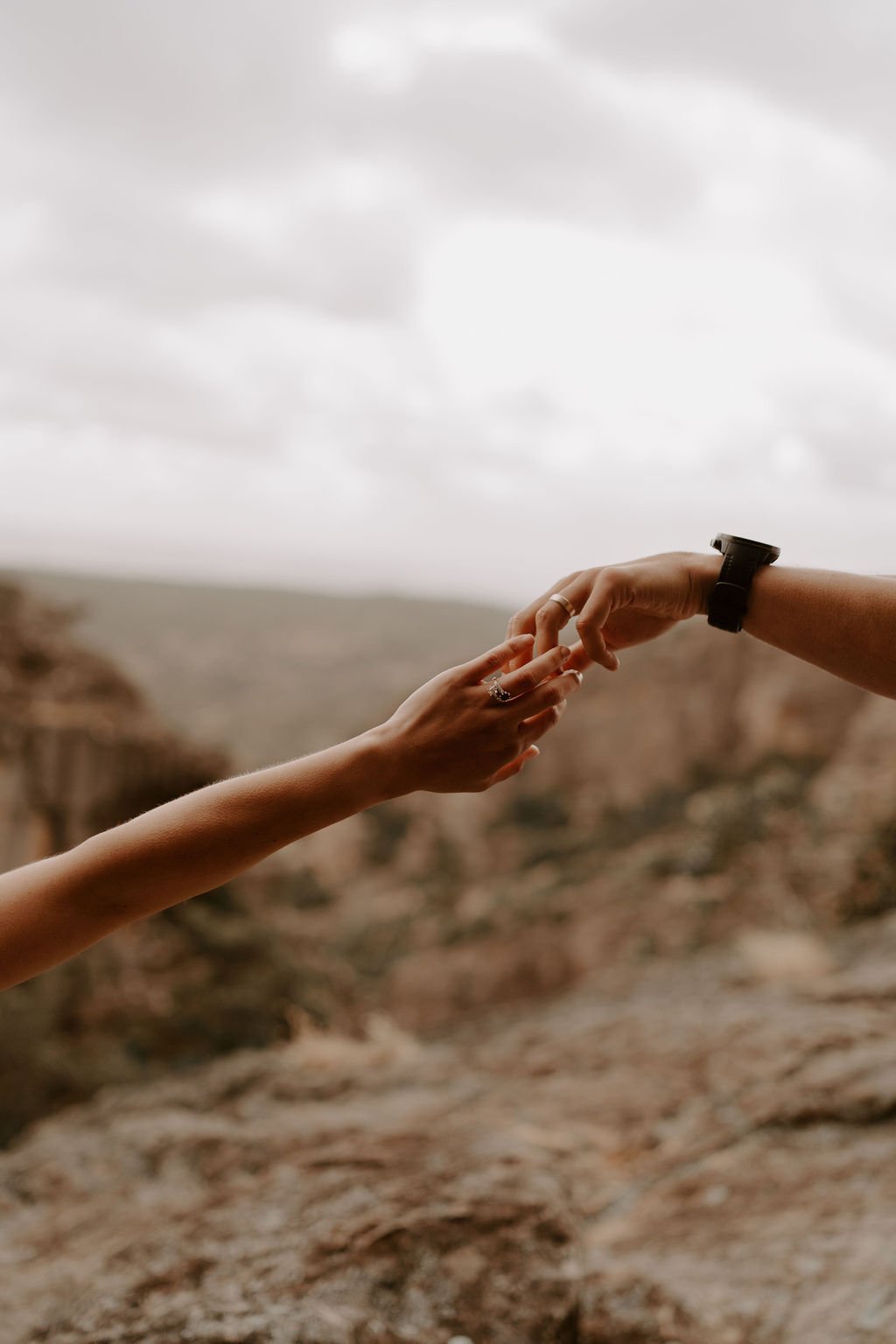 Eugenio, in 2015 found himself at a crossroads.  One which landed him in Melbourne, a last-minute decision in pursuit of adventure after a visa expired, a decision that could have seen him in any country but one which followed a life lived in Italy, England, China and New Zealand.  To Zoe, Melbourne was somewhat familiar, being her place of birth!  But by this time, was happy in Queensland, enjoying the sun and… well sun..!  The same country was enough for the forces of nature to bring the two together as they both decided to put themselves through a long, gruelling endurance race in Queensland in September 2016.  Somehow, whilst dodging obstacles they ran into each-other, at the start, in the middle and at the end.  As they leaned into each other, they learned they both shared a love of astrophotography which gave them even more reason to linger longer into the night after the race, under the helpful direction of a friend and the stars.  Despite the exhaustion from the race, they both found the energy to chat for hours, forgetting any strain and pain caused by the day’s proceedings.  They knew, what was obviously there in the ‘spark’ that kept them talking, that they had found the other person they had been looking for but were too scared to imagine existed.  The evening gave way to another farewell, one which the universe refused to accept.  A mere hours later, they found each other again via yet another one of those ‘chance’ meetings.  Some would start to get suspicious of these chance meetings!

There was only one thing to do.  Eat together.  Breakfast became an all day event, ending finally with a kiss.  While Eugenio was unsure of how to survive a cross country romance, Zoe had no doubt in her mind.  Life was simply too short to continue without him and so, several adventures later, Zoe made the trek South to live with Eugenio in January 2018.  There they set up base camp and spent all of their free time adventuring, hiking, trail running, rock climbing and all things outdoor adventure based – they tackled with gusto, together.  And, as they both wrote, “It was therefore fitting that on our 3 year anniversary, while completing a 9 day trek through the Italian alps, at the highest peak of the Tour du Mont Blanc, Eugenio held his great grandmother’s ring before me and asked me to marry him (to which Zoe replied “a thousand times yes”).”

Thank-you so much for sharing your story, Zoe and Eugenio! Continue on for more images below. Images by Mel Badsey, Married by Katie Reeve.

Plan your own dream elopement, with our Team Less crew, over on our Directory. Let the adventure begin!