Kalpana and Matt go non-traditional for their wedding 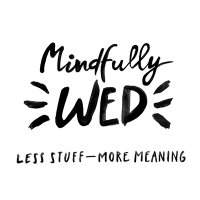 Kalpana and Matt go non-traditional for their wedding
Kalpana and Matt met at a salsa party and soon discovered they had a lot in common. They are both foodies, academics and salsa dancers. It was a trifecta that lead to a well thought out wedding. They decided not to have a big fancy affair, instead they had a private ceremony and a big party the following day.
Their ceremony was very personal with only Matt’s parents and Kalpana’s mum and sister in attendance followed by morning tea at their favourite spot Two Chaps Cafe in Marrickville. They both work from home and take a regular walk-breaks together which was where they had their photographs taken. Kalpana is from Singapore and chose to wear her sari for the occasion.
The next day, they threw a party to celebrate their marriage with friends at St Joseph’s Guest House. They both put a lot of critical thought into everything they do and decided upon a lecture on martimony – the history of marriage from forced arranged marriage to romantic contexts and why society still needs this tradition. They explained why they chose marriage despite not being traditionalists themselves. An open discussion followed whereby all guests were encouraged to share their views giving a platform for many refreshing and ranging opinions.
The band started up as Kal and Matt lead the first dance into what was a night of feasting, drinking and dancing. It was a real DIY wedding with their professional chef friend Julia preparing the food; Matt’s brothers manning the bar and Katherine from Something Blue Photography doing photography and Kal’s hair. Instead of gifts, the couple asked their guests to donate to a charity.
Some guests were quite disappointed that they didn’t get to see a lovely romantic ceremony but mostly it was received with great interest. Kal and Matt designed a wedding that reflected them and for that we salute them!

Anna and Tim's wedding, a reflection of their values of living simply and ethically